As of December 2019 I'm consolidating all my blogging onto my personal website at http://infernalgeometry.com

Posted by Toby Chappell at 6:50 PM No comments:

In an effort to consolidate my social media efforts for promoting Eyes of Ligeia and Misdreamt, I'm planning to route it through stonyrubbish.tumblr.com . Since music, the esoteric, my interest in minimalism, and whatever other topics move me enough to feel the need to comment, are all interrelated at a deep level, it makes sense to put them in a single location.
Posted by Toby Chappell at 5:16 PM No comments:

After a long period of silence since the announcement of its Remanifestation, the first Eyes of Ligeia release in 9 years is finally released!

Continuing in the style of 2004's What the Moon Brings, 2015's The Sidereal Messenger continues with the themes of Starry Wisdom, the influence of H.P. Lovecraft, and an updated take on the same ethereal atmosphere that Doom-Metal.com called the "brooding sounds of decay and eternal night".

Available at http://eyesofligeia.bandcamp.com on CD and via download.
Posted by motiondemon at 7:08 PM No comments:

After a 6+ year hiatus, I've began making new music that I intend to release as Eyes of Ligeia, continuing somewhat in the atmospheric doom (with touches of black metal) style of 2004's What the Moon Brings. (Excellent reviews of that CD can be read at http://doom-metal.com/reviews.php?album=623 and http://www.metal-archives.com/reviews/Eyes_of_Ligeia/What_the_Moon_Brings/44661/). To this style I am adding some of the electro-acoustic ambience from my Misdreamt project which has been where most of my musical output has come from the last 2-3 years (more at http://misdreamt.bandcamp.com).

Why now? The first Misdreamt CD was very much in the EoL style but with all the metal elements stripped out. The second CD went much further into experimental dark ambient territory. When I started working on material for the third Misdreamt CD the songs were becoming much more in the style of What the Moon Brings, and it felt like it was now time to embrace that style more fully and pick up where Eyes of Ligeia left off. I came to have more to say musically and lyrically that only fit with the Eyes of Ligeia concept.

As part of relaunching EoL, What the Moon Brings has been re-released (digital only for now) on Bandcamp (at http://eyesofligeia.bandcamp.com)

I am currently working on a new EoL demo, which will be shopped around to appropriate labels (or self-released through Bandcamp if that doesn't work out, but given the past level of name recognition I am hopeful that a suitable label can be found).

Posted by Toby Chappell at 7:34 PM No comments:

Apophenia has been out for a little more than three months now digitally, and about two months as a physical CD. The limited edition CD-R (with hand drawn inserts) is sold out.   A bunch of review copies have been sent out, and I hope to have the results of those soon...

In other news, my 2004 release under the banner of my former project Eyes of Ligeia has finally been released on Bandcamp. https://eyesofligeia.bandcamp.com/album/what-the-moon-brings

Of all the things I've ever released (and trust, my there have been a lot under various names over last 15 years), this is still my favorite, and is the release I compare all my others too.

Posted by Toby Chappell at 2:42 PM No comments:

Apophenia is based on manipulated sounds (static, voices, field recordings) combined with minimalist guitar and percussion.

"Any fact becomes important when it is connected to another." - Umberto Eco

All sentient beings look for patterns in their environment; when the mind looks too deeply into phenomena that otherwise have no meaning, it can project voices onto static, a face onto the surface of Mars, or its innermost fears onto an otherwise random collection of ink blots. The line between meaning and nothingness is as fleeting as our own self-awareness.

Posted by Toby Chappell at 12:24 PM No comments:

On July 2, the new Misdreamt CD, Apophenia -or- The Final Static That Can Never Be Removed, will be released digitally (via Bandcamp), and in a limited edition hand-drawn CD version. There will be a more widely available physical release soon after.

There is a personal significance for July 2, important to reconciling patterns in my own life, that I will not go into here.  But, while researching other events that took place on that date, the following came to light:

- July 2, 1897: Guglielmo Marconi receives a patent for radio.  While Nikola Tesla is later retroactively acknowledged as radio's inventor (primarily due to the fact that Marconi's work was critically dependent on more than a dozen patents that Tesla held), Marconi received the Nobel Prize in Physics for his work.  Radio receivers are one way that Electronic Voice Phenomena (EVP) can be recorded, and EVP plays a major role in this Misdreamt release.

- July 2, 1877: Author Hermann Hesse is born.  Hesse's novel The Glass Bead Game (cited in his 1948 award of the Nobel Prize for Literature) is a notable among other things for its titular Game, a means of reconciling seeming disparate fields of knowledge, and finding the patterns that tie them together in both individuals and in the greater stream of history.

- July 2, 1566: Nostradamus dies. Predictions and prognostications, where they have any validity at all, are an expert reading of the patterns that shape events. That being said, it is much easier to predict retroactively than it is in advance.  As Umberto Eco wrote in Foucault's Pendulum, "Any fact becomes important when it is connected to another."

The track listing for Apophenia will be as follows: 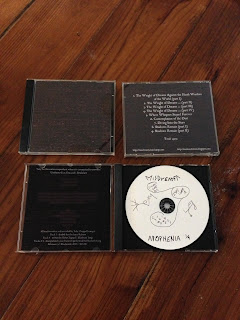 Posted by Toby Chappell at 3:50 PM No comments:

Toby Chappell is a composer, guitarist, and sound sculptor currently residing in the Atlanta, GA area. He has studied and/or collaborated with such diverse artists and collectives as the Pythagoras Society, Robert Scott Thompson, Eyes of Ligeia, and the Black Muse Element. Currently, Toby is focusing on film soundtrack, electro-acoustic, and guitar-based ambient music, all of which he releases pseudonymously as Misdreamt.